What are losses? I can't really answer that question. I get the big concept, but the details elude me. The loss of some $25 trillion from the crash of stock markets would certainly seem to qualify as a loss, but it's not the sort of loss that people estimating losses are thinking about. They're looking at defaults and write-offs. At least I think that's what they're looking at.

Next question: What is money? What is liquidity? That's unclear to me too. One thing I do know: the old standard definitions--the now electric M1, M2, and MZM, the skyrocketing Adjusted Monetary Base, the late great M3--no longer suffice to understand money or liquidity.

In their booklet, New Monetarism (2006), two investment professionals, David Roche and Bob McKee, give an original take on the "what is money and liquidity?" question, an essential preliminary to the "what are losses?" question. 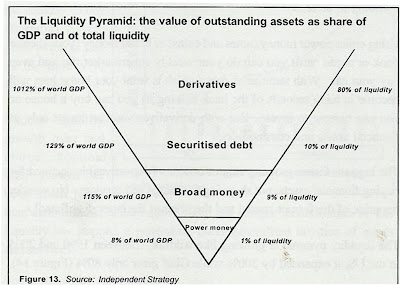 With this graph describing a "liquidity pyramid," the authors seek to see visually the new structure of money--the new world financial order that grew up over the last decade, now breaking. It is a world that is emphatically not captured by the traditional measures of money.

"Today global liquidity is like a massive pyramid standing on its head," they warned two years ago. "It represents at least ten years of GDP and is growing at least five times faster than GDP." There are four levels:

a) "At the bottom of this inverted pyramid is a tiny triangle of central bank power money."

b) That expands into "broad money," basically the only form of money recognized forty years ago.

c) "On top of broad money now comes a much bigger slice of the liquidity pyramid, composed of securitised debt markets, where much traditional bank lending now gets sold off as bonds."

d) "Finally, at the top come the massive derivative and other exotic asset markets, compromising nearly 75% of total global liquidity."

This was written in 2006. The term "inverted pyramid" was meant to suggest that the system could not long stand and would soon verify Minsky's hypothesis that a lengthy period of stability led inexorably to instability. They were right.

There is another important implication. The way we measure money, inflation, unemployment is so skewed by political convenience and bureaucratic habit, to say nothing of fossilized imaginations, that the reported aggregates are often worthless and usually misleading. Beware constructing theories on the basis of these official statistics. Students must frequently dig into the assumptions behind reported statistics in order for them to be at all useful.

So there we are. The "shadow banking system" is not captured in the traditional monetary aggregates, just as inflation and unemployment are not adequately captured in government statistics, with their convenient methodological adjustments.

Citizens! You are justly angered by the malefactors of great wealth! Spare some annoyance, at least, for Washington's misleading statistics.