Unemployment Mythologies and the "Misery Index"

This chart, also from John Williams' Shadow Government Stats, shows the unemployment rate according to three different methodologies. The official rate in red is especially misleading because it is dominated by assumptions about job creation in a normal economic expansion (the so-called birth/death model). In 2008, it kept showing expansion in financial services and construction, when anybody who could read a business page knew that wasn’t so.

The Bureau of Labor Statistics calculates a broad measure of unemployment (U6), also given in the chart; Williams has adjusted for that in his SGS Alternate Unemployment Rate to reflect discouraged workers "defined away" when the methodologies were recalculated during the Clinton Administration.

Adding the inflation rate and the unemployment rate together gets you a "misery index." Coined by the economist Arthur Okun, the phrase entered the political arena in the 1970s, with Jimmy Carter declaiming against a misery index of 13.57 in the summer of 1976. Then Ronald Reagan made it a centerpiece of his campaign in 1980, when the misery index reached a high of 21.98.

According to official government statistics today, the misery index is at 13.5, a lot lower than it was in 1980, and you could go lower than 10 and be feeling awfully chipper if you used the "pce/deflator" to calculate inflation. But if you measure inflation and unemployment according to the methodologies in place in 1980, as Williams has done, it's at about 26.

The Peterson innovation is to add some weightings for equity and real estate prices in its "augmented misery index," which boosts it to 24.2.

However, using Williams' inflation and unemployment numbers, and adding 10.7, gets you a misery index of 36.7.

Anybody for a drink?

The authors of the Peterson Institute study seem most interested in getting their misery index to talk to presidential approval ratings, whereas my main interest is in misery as such. In 2004, there was a guy with a website who showed the close inverse relation between gasoline prices and presidential approval ratings, and I admit to having studied this closely in that presidential race, thinking that it would matter. Then the Bushies engineered lower gas prices into the fall, indicating that they were studying this master political indicator with the same rapt attention. 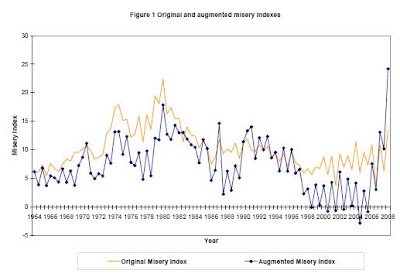