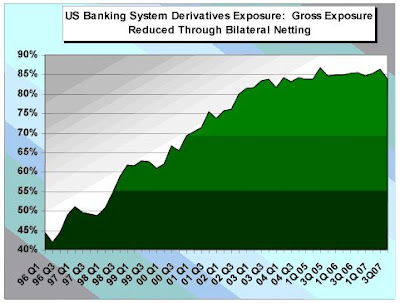 This chart shows that US Banks offset their exposure through “bilateral netting.” But the “Value at Risk” formulas on which these contracts are based, notes Contrary Investor, assumed 100% counterparty solvency and liquid markets, neither of which exist at this point in time. This chart in effect shows the potentially cascading consequences of defaults within the system.

The American International Group and Lehman Brothers collapses in September 2008 were especially important. Essentially, they threatened to destroy the “hedges” that other institutions had put on their various exposures.

How big is this "counterparty risk?" That is not clear. The settlements from the workout over the Lehman bankruptcy seemed to cheer the markets as not as bad as had been feared, but the whole thing is a vast swamp of which the extant public information is extremely limited.

This "transparency" question is in basic ways the most damnable aspect of the entire thing. The utter lack of any transparency is a vast satire on the many lectures given, to Asians and others, by American financial leaders for the past ten years and more. Think of the pious political or religious leader caught in flagrante delicto, and you will have acquired a clear picture of the moral significance of the financial crisis. Except it's a lot worse, being in the realm of calamitous consequences to the public good, both here and abroad.

Despite continued paeans to transparency, pledged by both Bernanke and Paulson in congressional testimony, the Federal Reserve, notes James Quinn, "has since withheld the names of all financial institutions that have borrowed from the Fed - and will not reveal the collateral that they have put up for those loans. Bloomberg News has sued the Fed under the Freedom of Information Act to force it to reveal where $2.2 trillion of taxpayer money has gone. The Bloomberg lawsuit argues that the collateral lists 'are central to understanding and assessing the government's response to the most cataclysmic financial crisis in America since the Great Depression.'"
Ha! $2.2 trillion! That seems a bit dated now! As of November 24 Bloomberg totes up the guarantees at over $7 trillion. Barry Ritholtz sees it going to $10 trillion. About the collateral behind these public guarantees, for which the taxpayer is on the hook, we get bland assurances but no information. The trenchant Willem Buiter makes the case here against Bernanke's transparently weak justifications for total secrecy. "This form of Publikumsbeschimpfung by the central banks is simply not acceptable in a democratic society."