Total US Debt and US Debt/World Equity ratio 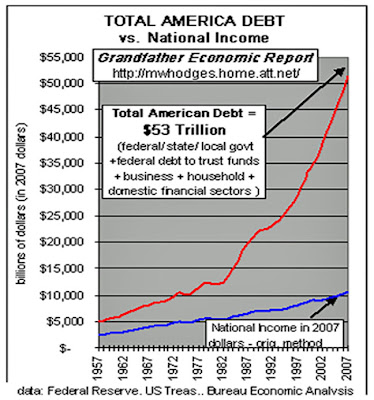 This chart from the Grandfather Economic Report estimates total American debt at $53 trillion. Unlike the $48 trillion sometimes cited, Grandpa includes the federal debt to trust funds (but not other unfunded obligations in Social Security and Medicaid, nor the $12 trillion in financial and real estate guarantees).

Whatever the exact size of total US debt, it's fair to say that it is practically equivalent to world GDP, estimated at $60 trillion. As we saw earlier, world stock market value reached a high of $62.57 trillion on October 31, 2007 but had fallen to $42.21 trillion on September 30, 2008. It then shaved off another $10 trillion as markets crashed into late October. Let's peg it at around $30-35 trillion until updated figures come along.

Taking total US debt at $50 to $60 trillion, and world stock market capitalization at $30 to $40 trillion, we’ve still got total US debt at some 120% to 200% of world stock market value, gyrating daily. In other words, the debt owed by Americans is some 160% larger, give or take whatever, than the expected future earnings of all the world's publicly listed corporations!

Can this possibly be sane?

P.S. Surely econopicdata could serve us up with a nice set of charts showing variations on the "US Debt/World Equity Ratio." Thanking you in advance.