Slicing and Dicing Those Damn Derivatives 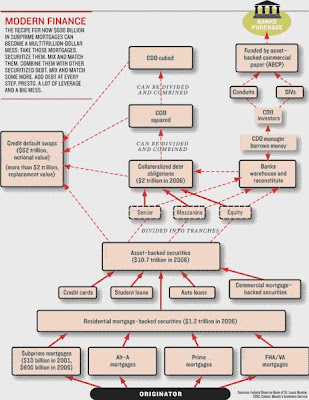 Securitization is way too complex for ordinary mortals to understand, but the following discussion (shortened from Matt Miller’s deconstruction at thedeal.com) may help.

"About six in 10 subprime mortgages were securitized in 2003, which became part of a much larger pool called residential mortgage-backed securities (RMBS). At the beginning RMBS were packaged by mortgage type, but subsequently all mortgage types (Alt-A, conventional, jumbo and FHA/VA mortgages) were mixed and matched. FDIC-insured institutions alone held $1.2 trillion of these in 2006.

At the next level, the underlying assets are divided primarily into a debt-recovery pecking order into tranches -- senior, mezzanine and equity -- and then pooled. These are called collateralized debt obligations. A CDO can be backed by everything from corporate bonds to real estate investment trusts. A collateralized loan obligation is a CDO backed by bank loans. The CDO market in 2006 totaled $2 trillion.
CDOs themselves can also be divided and combined in various fashions, then sold off. These funds-of-CDO-funds are called CDO squared. That process can be repeated with CDO squared, creating CDO cubed.
Leverage fueled the acquisition of these instruments at every level. The result: A 20% drop in value could easily wipe out an investment.
To mitigate the risk of failure, creditors and holders of these securities bought credit default swaps, a kind of insurance policy originally crafted for corporate debt. The market for these doubled from June 2005 to the end of 2007.

At beginning of 2008, the notional value of contracts outstanding stood at $62.2 trillion, while replacement value eclipsed $2 trillion.

Most of the firms that took the biggest role in issuing asset-backed securities (e.g. Countrywide, Lehman Brothers, Bear Stearns, and Washington Mutual) are now defunct."

OK, got that? Still confused? You may find further enlightenment in Charles Daví’s Derivative Dribble and in older posts at Sudden Debt.
See also this very clever visual guide to the crisis, via Barry Ritholtz.
Posted by DCH at 11:58 AM