The Housing ATM and Losses on Real Estate 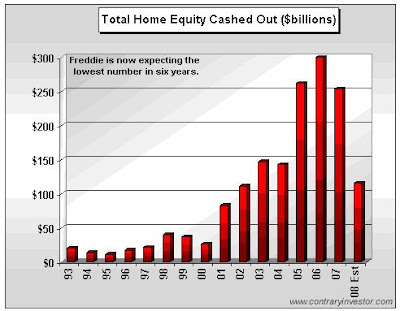 There are various ways of estimating likely total losses on residential real estate. Myself, I like this chart. If we return to the lending standards of the 1980s and early 1990s, when you had to put 20 percent down and get a fixed term mortgage at a high interest rate, it would follow that the equity withdrawals of the past seven years (the famed “Housing ATM”) will be roughly equivalent to the losses on residential real estate. Even if the government revives the mortgage insurers, such that households only have to come up with a 10 percent down-payment, the credit terms will not support (barring hyperinflation) a return to the prices that prevailed in the boom.

The main point: If we stipulate that it was above all a credit boom that fueled the real estate boom, the puncturing of that bubble will probably wipe out a good portion, perhaps all, of everything “taken out.” A lot of other factors--the vast oversupply of units, especially--will affect this question, undoubtedly, but I also like this "money taken out" as a reasonable metric for losses.

Another way of expressing this point is that manic conditions in the credit markets create "fictitious capital," a term from the Austrian economists (Ludwig von Mises and Friedrich Hayek). A rough definition of the term is capital multiplied by debt and leverage. Return credit conditions to some degree of "normality," and the fictitious capital disappears.

Extend the thought experiment: just how much value was extracted by the Wall Street money machine over, say, the last seven years? I can't find an aggregate amount, in nominal dollars, of total financial sector profits for that period, one inclusive of reported profits, bonuses, and other executive compensation, but such a thing could be constructed with some legwork. So, in our thought experiment, let's take that total and make an estimate of how much of the profit essentially derived from extremely artificial credit conditions, as with the "equity take-outs" in residential housing. Adjust the total profits by separating "that which is a good business in normal times" from "that whose business model was based on unlimited credit and high leverage." Then make an estimate of potential losses on the basis of that.

Analysts have spoken, with good reason, of privatized profits and socialized losses. My thought is a bit different: that probable losses can be measured in relation to previous profits. Certainly worth thinking about. It suggests a different criterion than either "mark to market" or "mark to maturity" in estimating "total losses."
Posted by DCH at 10:59 AM