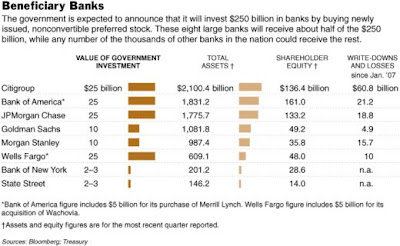 The plans they are a changin'. It's difficult to keep up. The latest iteration has the following features:

"Mr. Paulson said the Treasury would make $250 billion available to banks to help recapitalize those banks and to get them lending again, among themselves and to businesses and consumers.

In addition to injecting money into the banks, according to the plan, the United States would also guarantee new debt issued by banks for three years — a measure meant to encourage the banks to resume lending to one another and to customers.

The F.D.I.C. would also offer an unlimited guarantee on bank deposits in accounts that do not bear interest — typically those of businesses — bringing the United States in line with several European countries, which have adopted such blanket guarantees.

And the Federal Reserve would start a program to become the buyer of last resort for commercial paper, a move intended to help businesses get the money they need for day-to-day operations.

Another $125 billion is allocated for thousands of small and midsize banks. They will be eligible for government investments reflecting a similar proportion of their assets." (NYT, 10/14/08)