The Mothership of the Derivatives Structure: JP Morgan Chase 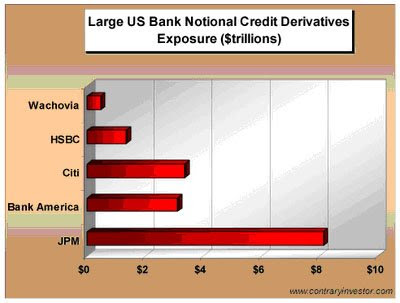 JP Morgan Chase is the queen bee of the derivatives structure, with something like 50% of all derivatives exposure. It was undoubtedly a “counterparty” to Bear Stearns on a large number of derivatives, which helps explain the “rescue” engineered by the Fed. Though this was styled as a rescue of Bear Stearns, it was also, and perhaps more importantly, a rescue of JP Morgan. Now the funny thing is that JPM has held up better than any other financial institution in the maelstrom, though it has the most exposure to the entire derivatives complex--that is, it would seem most exposed to "counterparty risk." And yet it almost broke out to a new high during the October 2008 maelstrom. Strange.