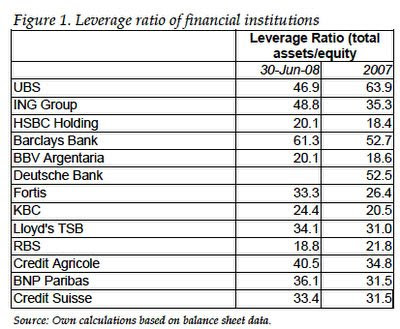 It is not only US financial institutions that are in jeopardy from the credit crunch. American International Group, rescued by the US government in September 2008, wrote between $300 and $450 billion of credit insurance for European banks, which enabled the the stolid Europeans to maintain leverage ratios way beyond prudent lending standards. How much of this is impaired? AIG extended those guarantees, as it explained in its last annual report, “for the purpose of providing them with regulatory capital relief rather than risk mitigation in exchange for a minimum guaranteed fee.” In effect, as Paul Kedrosky comments, “AIG thus helped to organize regulatory arbitrage on a gigantic scale.” The impending liquidation of AIG forces these banks to “find other ways of obtaining the ‘regulatory capital relief’ they appear to need urgently.” Hence the massive rescue programs mounted by European governments.