Leverage Unbound at the Investment Banks 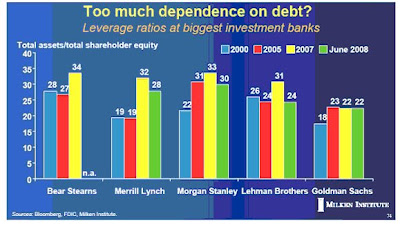 This chart from the Milken Institute demonstrates the excesses of the credit boom and also suggests why all five investment banks have either gone out of business (Lehman), been folded into another bank (Bear Stearns into JP Morgan, Merrill Lynch into Bank of America), or converted to a bank holding company (Goldman Sachs and Morgan Stanley). The investment banking model, as it prospered in this decade, came to rely on “securitization”—collecting enormous fees for bundling together various debts—and “insurance” for guaranteeing the debt via credit default swaps, each strategy then being levered to the hilt. The model depended on the ready provision of short term credit. It’s now dead as a doornail.

One interesting feature of this chart is that it shows leverage in the high teens to high twenties in 2000. Recent attention (see Barry Ritholtz) has focused on the 2004 rule change by the Securities and Exchange Commission removing leverage requirements. According to press accounts, the net capital rule, imposed in 1975 to regulate the broker dealers, required “that broker dealers limit their debt-to-net capital ratio to 12-to-1, although they must issue an early warning if they begin approaching this limit, and are forced to stop trading if they exceed it, so broker dealers often keep their debt-to-net capital ratios much lower.”

So explain to me: how is it that the investment banks are shown in this chart as having leverage ratios as high as 28 to 1 in 2000? If the facts are as they are described in the Milken Institute chart, we must ask: Was it brought to the attention of the SEC in 2004 that the investment banks had been blissfully ignoring the regulation for oh these many years? Were they or were they not in compliance? How did this happen? Who is responsible?