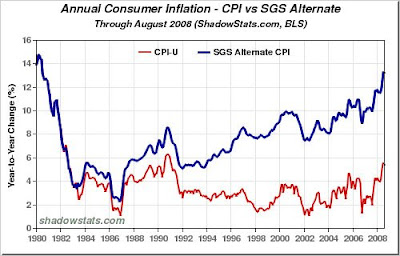 Measures of financial stress in the real economy are obfuscated by the unreliable nature of government statistics. The guy who has delved most deeply into this is John Williams of Shadow Government Statistics, whose perspective is summarized in this February 2006 interview. In this chart, the red line shows the “headline” inflation figures given out in official government releases. The SGS Alternate CPI is calculated according to the methodologies in place in 1980.
Posted by DCH at 3:33 PM