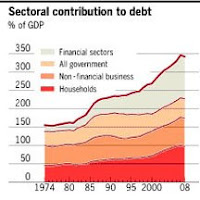 This little chart from the Financial Times is, as it were, the master chart, the one that tells you just about everything you need to know about the debt problem. Total credit market debt as a percentage of GDP reached 350% in 2008, with financial, government, non-financial, and household debt making new records.

The FT graph is a bit sly in its representation of government debt, as it almost seems the thing is contracting. Appearances are deceiving, as we see below.

The three graphs that follow, courtesy of Contrary Investor, give a better breakdown of the overall picture from the non-governmental side of things.

The rise of financial debt has been the most meteoric, growing from almost nothing in the 1950s to nearly 120% of GDP in 2008.

Household debt took off in the 1980s and is now about equal to GDP, way above the long term average.

Non-financial corporate debt seems a piker by comparison with these debt-imbibing sectors, but it too followed the trend, rising from less than 25% to nearly 50% of GDP since the 1950s. 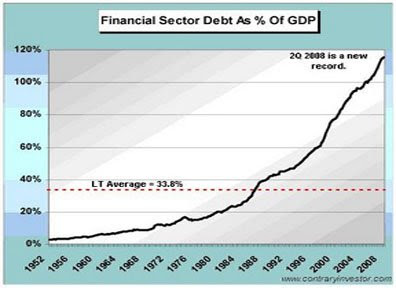 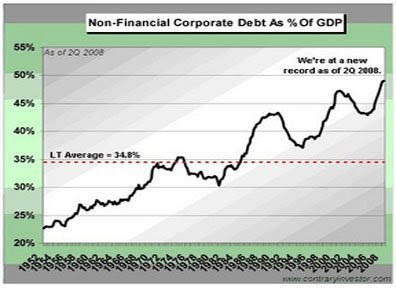 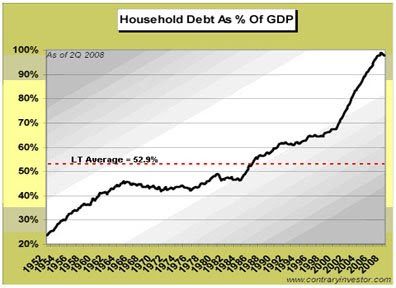 Yves Smith observes that the official debt estimates need to be treated with some caution. "There are some items that are arguably overstated (lines of credit are included at their full amount), but others are not included (second and third mortgages, and perhaps most important, contingent exposures like AIG's credit default swap guarantees)."
11/25/08
Posted by DCH at 1:35 PM