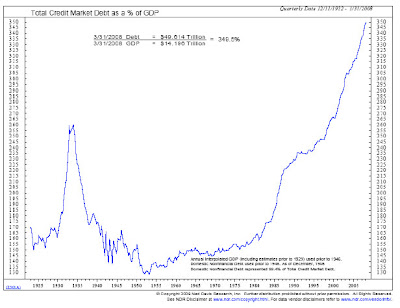 Like the previous chart, this gives total credit market debt as a percent of gdp, but over a longer period of time--from the 1920s.

Note the big surge in the ratio that took place during the Great Depression. That was due not to the expansion of debt but to the collapse of GDP. The collapse of incomes and the deflation in prices made debts contracted during the 1920s boom two or three times more onerous than previously, precipitating default and bankruptcy.
It is the comparison between our current 350% debt/GDP ratio and the 140 to 170% ratio during the 1920s and the 1945-1980 period that is most striking. Over the long run, that lower ratio may come to appear much more “normal” than our recent stratospheric attainments. A happy and healthy capitalism = debt/GDP ratios below 170%? I’m mighty tempted by that hypothesis, personally.
Posted by DCH at 1:31 PM