History is Not Bunk

Here's an even longer term view, though measuring non-public debt as a percentage of GDP (rather than, as in the previous charts, total credit market debt). The maker of the chart, with the red line, is suggesting the contours of a long or Kondratieff wave, but it is the gold line to which we draw attention here. It shows the unprecedented nature of current debt levels.

This is especially a problem for the Anglosphere--Britain and Australia also imbibed deeply the sweet elixir. The White Man's Burden, it turns out, is debt. The chart below from Australian economist Steve Keen makes the point. 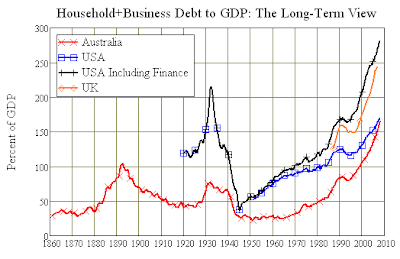 In the midst of a debt crisis, the question naturally occurs: how is it that the authorities seemingly took no notice as debt levels reached these historically unprecedented levels? What were they thinking? Keen supplies a disturbing answer:

"It has happened because Central Banks are run by economists, and the dominant “Neoclassical” faction within economics ignored the real lessons of the Great Depression.

The false lesson that Neoclassical economics preaches is that the market economy is fundamentally stable, and the Great Depression was caused by the monetary authorities tightening credit in the aftermath to the Stock Market Crash, rather than loosening it.

The real lesson of the 1930s is that a credit-driven market economy is fundamentally unstable, and a Great Depression occurs when debt-financed speculation results in excessive private debt at the same time as inflation is low."

Under "the misguidance of conventional economic theory," and with their "Neoclassical eyes fixated on the rate of inflation," central bankers and other official organs ignored the huge buildup of private debt. "This is why the sudden collapse of the world economic order took economists by surprise. They were looking at their mathematical models, which ignore private debt (and indeed money!), rather than at the real world, where debt is king."