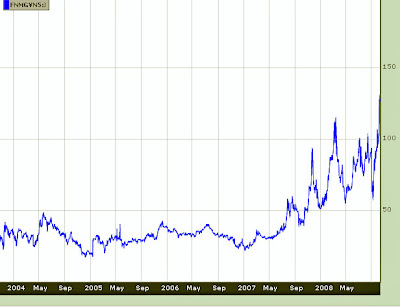 The spread (or difference in yields) between five year Fannie Mae notes and similar Treasury notes has traditionally also been a sign of financial stress, and the spread passed historic levels on October 14, 2008.

This relationship is complicated. Fannie Mae was brought into government receivership in 2008 after its stock price collapsed in the summer. The US government has guaranteed the debt, with apparent conviction. Yet if the US government stands behind the “agency debt”—named after the “Government Sponsored Enterprises” or “G.S.E’s,” of which mortgage buyers Fannie Mae and Freddie Mac are the biggest and baddest—why shouldn’t treasuries and agencies trade at the same value? Why the premium? If Mr. Market distrusts the U.S. Treasury regarding the agency debt, why should he be super-confident about the Treasury debt? Here are a couple of factors--unintended consequences from the Treasury bailout, a sharp drop in foreign central bank buying--that are relevant in considering these questions.

It is possible to spend your existence pondering such matters, which thank God I have not done (until recently).
Posted by DCH at 10:51 PM