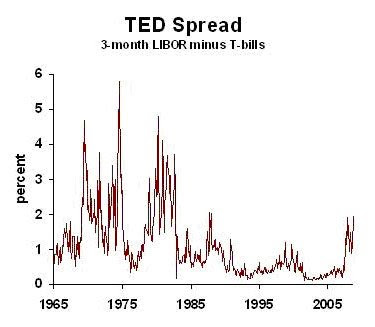 This chart gives a long term view of the TED spread--that is, the difference in yield between Treasury bills issued by the U.S. government and the 90 day Eurodollar. At 2% when this chart was drawn, it subsequently shot up to 4.64% on October 10, 2008. There is an updated version available at the New York Times and Bloomberg. Further discussion at Macroblog, where this chart first appeared.
Posted by DCH at 10:50 PM