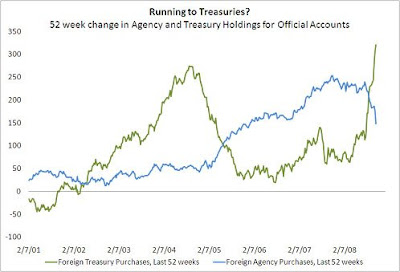 So is there a difference in the US government guarantee of Treasury debt and "agency" debt--that is, the debt issued and guaranteed by Fannie Mae and Freddie Mac? Foreign central banks apparently think so; they have made a big change in their buying patterns over the past several weeks, as this chart from Brad Setser shows.

Setser explains the graph as follows: "Over the last 52 weeks, foreign central banks have added $321b to their Treasury holdings at the New York Fed (and no doubt more to other accounts) and $147b to their Agency holdings — for a total of $468b. And there clearly has been a big shift towards Treasuries recently. The rise in Treasury holdings over the last two weeks, annualized, tops $1 trillion. The fall in Agency holdings over that period (after the bailout of the Agencies), annualized, also tops $1 trillion."
That is interesting. Foreign central bankers are not just thinking about the maintenance of their currencies; they are thinking about credit quality, just like private investors are doing.