The US Hedge Fund and the Bond Conundrum 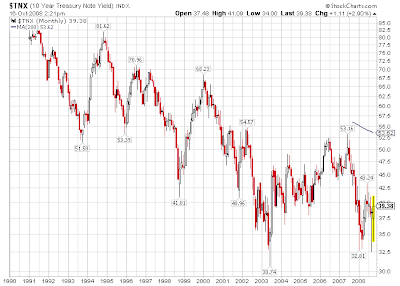 The mother of all bailouts has yielded a strange progeny: the United States as a Giant Hedge Fund.

Think back to the chart earlier showing the blowout of high yield bonds and credit spreads.

Note that the toxic paper the US government has taken on trades at an even deeper spread than junk bonds.

Note also that the public has an insatiable appetite for short term Treasury bills, whose yields have practically disappeared in the “flight to safety.”

Note in the chart above, finally, that investors have also rushed to the apparent safety of long term government bonds, which offer interest rates from 3.5 to 4.0 percent.

The bond conundrum, circa 2008, is simply this: How can the government take on all this bad debt without fatally impairing its own credit rating?

As investors have fled from all else besides government debt, the government has taken on the “all else.” Its guarantee makes its own debt equivalent in value to the debt it has taken on, does it not? That strongly suggests that long term government borrowing rates are going up. Every other asset class has crashed; why not government bonds?

Take up the debate over bonds--the eternal conundrum between inflation and deflation--in rival statements by Mish and Gregor. 10/26/08
Consider also another aspect of the bond conundrum, vividly portrayed by Jake at econopic in this chart of the total return of government bonds (including agencies) as against investment grade debt over the last 30 years: 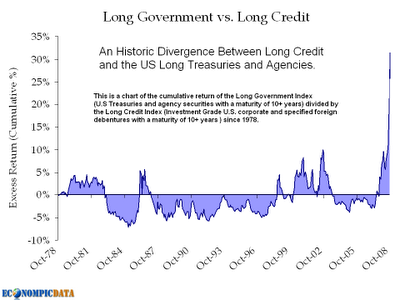