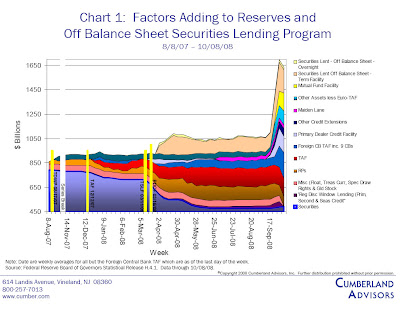 The government's strategy for dealing with the financial crisis, such as it has been, has been to exchange "cash for trash." This is definitely a work in progress, but as of October 8, 2008, this is how it looked. Note the stark contrast with the late September situation. The Federal Reserve is putting on to the government's balance all the bad stuff that was on the banks' balance sheets. You, American taxpayer, are now the proud owner of lots of "toxic paper," in the vast stratosphere of the "inverted pyramid" of derivative invention. Hooray. There is a guide to the acronyms in this report from Cumberland Advisors, where the chart appears.

In early November the Fed Balance Sheet Surpassed $2 trillion, and Dallas Fed President predicted it could surpass $3 trillion by January 2009.

Lee Hoskins, a former president of the Cleveland Federal Reserve Bank, sums up why Bernanke will win no plaudits in the Central Bank Hall of Fame: "The Fed has violated two principal tenets of central banking. First, don't lend to insolvent institutions, and second, don't lend on anything but the most pristine collateral -- and at a penalty rate."

The following chart from the November 22 Barron's, in which Hoskins' grim observation appears, sums up the data as of November 12, 2008. Barron's (which generally has been bullish all the way down, Alan Abelson apart) notes that were the Fed a commercial lender, "it would be a candidate for receivership, based on its capital ratios. Bank examiners generally view any lender with a ratio below 2% to be dangerously undercapitalized. The Fed's current capital ratio, or capital as a percentage of assets, is 1.9%." Its balance sheet, Jack Willoughby notes, " is as leveraged as any hedge fund's: Its consolidated assets amount to 53 times capital. Only 11 months ago, its leverage on this basis was a more modest 25 times, and its capital ratio 4%." The loans will "self-liquidate" if the financial crisis eases but will be an albatross if it does not.

"What we are seeing at present is not a reduction of the debt structure of the economy, but a shift from [private to public] hands. That can lead to four results, when the debt of the US Treasury is so large that it cannot be serviced:

* Inflation when the Fed monetizes the debt,
* Depression from vastly increased taxes,
* Debt repudiation (whether internal, external, or both), or
* Japan-style malaise for a long time."

Just how unprecedented the Fed's actions have been is also shown in this graph from West- Coast Whiner (Wcw), who frankly has a lot to complain about but maintains a generally cheery disposition. Notes Wcw: "Any time that a properly normalized series starts rivaling the freaking Depression, you have to worry." 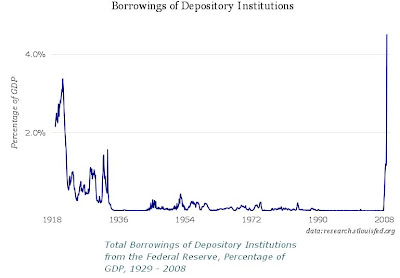