Man, Did I Screw Up

This is a portfolio tracking screen from MarketWatch that has only one position. It is a naked put on the Dow Jones Industrial Average, with a strike price of 130 (corresponding to 13,000 on the Dow Jones), with a December 2009 expiration. When I sold it back last winter and collected $4.85 billion, I frankly had no idea that the markets were going to collapse. Otherwise, I wouldn't have done it. You can see that the premium of $4.85 billion, which seemed easy pickings at the time, had become a deep red liability of $21.86 billion on November 21, 2008.

How can that be possible, you ask? The chart below shows the general vector. 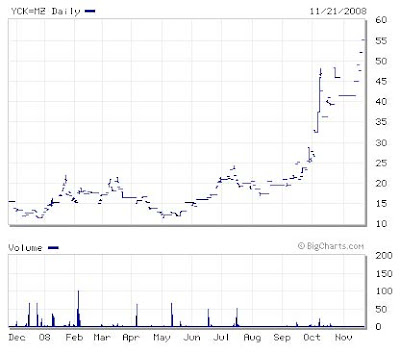 When you sell a put at 10 and it goes to 55, this is not an auspicious development, believe me.

Warren Buffett made a transaction similar to mine, except that his company, Berkshire Hathaway, doesn't have to pay off for 13 or so years, when the puts expire. Surely the government will debase the currency, making 13,000 on the Dow easily obtainable. Thank goodness, too, that Barron's believes Berkshire is only underwater by $5 billion on the trade, because on basically the same deal yours truly was hurting to the tune of $21.86 billion. How does Buffett collect such a large premium from that naked put without being underwater like I am?

Here are some facts about Berkshire's financial position from the bullish Barron's article.