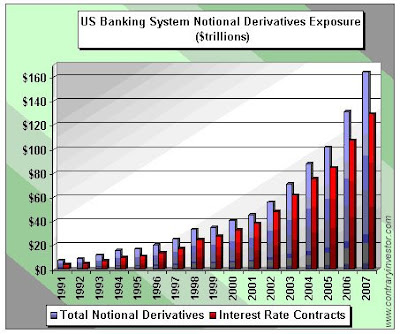 The gross excess displayed in the housing bubble and the debt binge are serious enough. They would portend, under any circumstances, profound financial distress and economic hardship. But there is one more danger that really does set this crisis apart in financial history, which has its fair share of crazy manias and shattering crashes. At the apex of this mountain of debt are financial derivatives of decidedly recent invention. Created, paradoxically, to manage the “risk” of taking on so much debt, they added a whole new layer of leverage to the system. Warren Buffet called them "financial weapons of mass destruction" for good reason.

This chart estimates the notional exposure to derivatives in the US banking system at $160 trillion; estimates for the world are usually around $600 trillion, following the Bank for International Settlements, though some estimate it as high as $1,000 trillion. Hey, it's only one quadrillion. This compares with a world GDP of some $60 trillion. “Notional” refers to the value of the underlying assets on which the derivatives are based, not to be confused with the “net” exposure of financial institutions, of which more later.

These instruments, despite their enormous size and implied leverage, have almost entirely escaped governmental regulation. They do not trade on an exchange; they are illiquid and highly complex. Their massive growth, which violated long-standing rules of financial probity, occurred under the watchful eye of the Bush-Cheney administration.

Next time someone says that “everyone is to blame” for the financial crisis, please do me a favor and trot out this chart. Indubitably, at the top of the Wall of Shame should be the custodians of the financial system since 2001, who aided and abetted the construction of this indefensible “house of cards.”

The New York Times also has a nice graphic showing the amazing growth of derivatives since 2002.