The Greatest Bailout of Them All

This chart, which initially appeared here in early to mid October, attempts to show the relative size of the Paulson Plan’s $700 billion authorization to buy up impaired securities from financial firms; follow this link for a brief history of the various bailouts.

This is a pretty cool chart, but look for it to undergo radical revision in the months and years ahead. That big blob on the right, in all probability, is going to get much larger. The AIG and Fannie/Freddie bailouts really belong in the big blob, and the AIG bailout is now $123 billion (oops, $150 billion) as opposed to the $85 billion first estimated. The Fannie and Freddie total ($200 billion) is the amount the Feds injected into these firms, but in all likelihood will not cover the potential liabilities on the bonds, which could be very large. Ultimate costs for the Savings and Loan bailout of the early 1990s are estimated at $220 billion, of which taxpayers were responsible for $178 billion. But initial estimates were only $20 billion. Funny how that works.

Think back to those initial estimates of the Iraq War's likely cost--No more than $50 billion! It will practically pay for itself!--and you will be in the right frame of mind to assess current governmental expectations. 10/16/08

Update, 11/28/08: I will keep the previous chart up as an artifact of happier days, but the size of the big blob has been advancing fast and furiously. Two separate estimates, one by Bloomberg and the other by the San Francisco Chronicle, give the latest estimates at $8.5 trillion (as of Thanksgiving, 2008). The first chart was put together by Jake of Econopic and given a few finishing touches by Jesse. The table at the bottom is from the Chronicle, via, Tim. 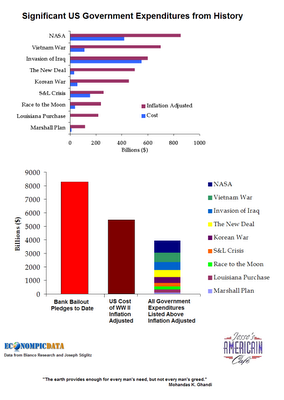 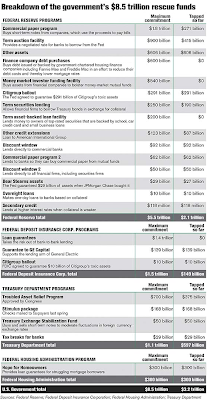