This is a worldwide crisis; the global capital markets and the world economy are a tightly linked system. That is one of the meanings, perhaps the primary meaning, of “globalization.” How far it will “uncouple” because of the financial crisis is a great unanswered question.

One of the ironies of the meltdown is that the countries previously deemed most immune (China, Brazil, India, Russia) have gotten hit harder than the US market, where the crisis undoubtedly originated. That is something to think about. Do not underestimate the power of money to foster resentment, ill will, dark malicious feelings. Remember your Machiavelli, who advised the prince that it is better to be feared than loved, but in no case should he be hated: “above all he must abstain from taking the property of others, for men forget more easily the death of their father than the loss of their patrimony.” The losses are rousing the American people to anger. The same causes will produce the same effects abroad.

Emerging stock markets have fallen by about fifty percent and were hit especially hard in the October 2008 crisis (click for updates). Emerging market bond spreads have also widened considerably, though they are far from decade-ago levels. On this website you can see spreads on twenty different countries and regions. The following snapshot, taken on October 19, 2008, gives the view from 1997. 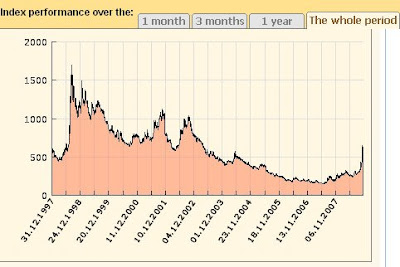 Class assignment: pick a country, read its press, and summarize the role the United States is seen to have played in the financial crisis by public opinion in the country.
Posted by DCH at 10:42 PM