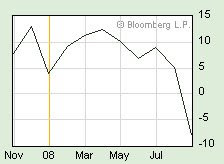 From Bloomberg, October 20, 2008: "Borrowing by U.S. consumers fell in August by $7.9 billion, the most since statistics began in 1943, to $2.58 trillion as lenders curbed access to loans." Clicking the link above will take you to a snapshot of the latest data on consumer credit. This index excludes loans secured by real estate (also collapsing) but covers most short-term and intermediate-term credit extended to individuals. The September and October data will show it falling much further.

The now suddenly altered credit environment occurs against the background of the low levels of household savings. "From 1960 until 1990, households socked away an average of about 9 percent of their after-tax income." Thereafter, savings steadily declined, with Americans putting away less than 1 percent of income in the last three years. As these charts show, household balance sheets badly deteriorated.
Savings declined as Americans leveraged their cash to investments in stocks and real estate. How has that worked out? "Household net worth, as measured by the Fed, fell $2 trillion in the second quarter from a year earlier -- and that was before the stock market's nosedive wiped about $3.9 trillion off investors' portfolios in the past month and a half."
This is some kind of double whammy for the middle and upper-middle class, but it also affects the poor and rich. With both credit and wealth evaporating, the American household's "debt/equity ratio" has just done a moonshot.
Class assignment: Is this the "new normal"? Who does it affect the most? What are the implications?
Posted by DCH at 10:43 PM