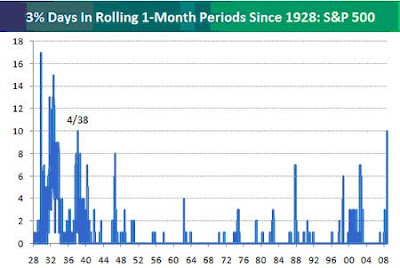 Stock market volatility in early October 2008 surged beyond any comparable level in the post 1945 era. Only the 1930s displays comparable mayhem. Bespoke Investment Group explains the above graph as follows: “Over the last month (23 trading days [since October 3, 2008]), the S&P 500 has seen 10 days where the index rose or fell (mostly fell) by more than 3%. You have to go all the way back to 1938 to find another one-month period where there were this many 3% days. As shown in the chart, there were many multi-year periods between 1950 and 2007 where the S&P 500 didn't have even one 3% day. If you're not a regular market participant and someone that is tells you we are experiencing something that hasn't happened since the Great Depression, they're not joking!”

Kim Zussman, in "Mother of All Swans," has also put together a long term historical chart measuring volatility. Zussman used the daily returns of the Dow Jones Industrial Average from 1928 to early October 2008 and calculated the standard deviation for every non-overlapping 10 day period. The Crash of 1987 is still at the top of the charts on this one.

Both charts above were made in early October 2008. Here's the latest snapshot of two widely used measures of volatility, the VIX and the VXO (click for updates). As you can see, both blew well past the post-1945 record as measured by Bespoke and are back to the wild levels of the 1930s.

Markets, despite being the results of millions of individual decisions, have personality. Sometimes they are the very picture of bourgeois respectability. At other times, like now, the alternating moods swings of euphoria and panic resemble the turbo-charged highs and suicidal lows of a crack addict. "Nothing better! I'm gonna die!" Such is the wonderful world of the American capital markets, circa 2008.

If you want to learn more about volatility, the go-to-guy is Bill Luby at Vix and More.
Posted by DCH at 4:59 PM