One in Six Homeowners Under Water 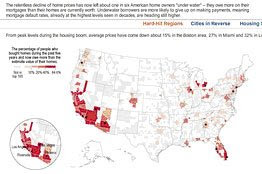 The Wall Street Journal reports that the fall in home prices "has left nearly one in six U.S. homeowners owing more on a mortgage than the home is worth, raising the possibility of a rise in defaults. . . . About 75.5 million U.S. households own the homes they live in. After a housing slump that has pushed values down 30% in some areas, roughly 12 million households, or 16%, owe more than their homes are worth, according to Moody's Economy.com.

The comparable figures were roughly 4% under water in 2006 and 6% last year, says the firm's chief economist, Mark Zandi, who adds that 'it is very possible that there will ultimately be more homeowners under water in this period than any time in our history.'

Among people who bought within the past five years, it's worse: 29% are under water on their mortgages, according to an estimate by real-estate Web site Zillow.com." 10/08/08
Not everyone is taking it well.
Posted by DCH at 8:58 PM