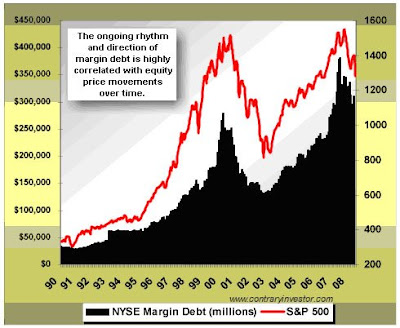 Traders on Wall Street were also highly leveraged. Margin debt topped out at $381 billion in July 2007, surpassing the $275 billion achieved at the top of the tech and telecom bubble in 2000. A collapse in margin debt is part of the general deleveraging now ongoing. It contributes to market volatility as traders are subject to margin calls and forced selling.


The above chart, from the folks at contraryinvestor, is out of date, and margin debt fell sharply into the fall of 2008. The table below from the New York Stock Exchange shows it at $233 billion at the end of October 2008.

The column on the right showing credit balances in margin accounts provides an even more dramatic picture of the deleveraging: it fell from an all-time high of $386 billion in August 2008 to $187 billion in October 2008, down over 50%.

It will be interesting to see if the November margin figures show a decline to 2002 levels. If not, that would be a significant divergence from the equity averages, which for a time went through the 2002-03 lows. 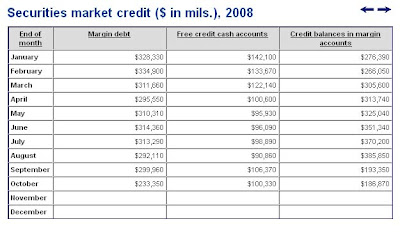