In a "carry trade," speculators borrow money from a currency whose interest rates are low and invest in currencies where yields and opportunities are higher. When their investments crater, as now, they must buy back the currency whence they borrowed the funds. The Japanese Yen was the favored currency for carry trades in the recent past, and in the fall 2008 financial crisis the trade unwound savagely, as this chart of the Aussie dollar against the yen shows (click for updates). 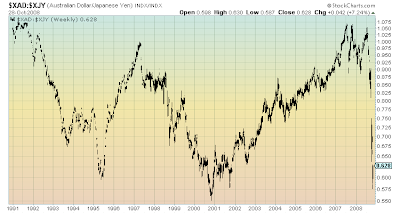 The Euro/Yen cross has also taken a nosedive, though the longer term chart does not suggest unreasonable valuations at 1.19 (its price on October 24, 2008--click for updates) 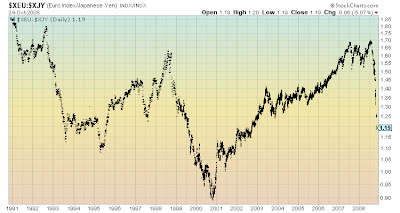 The dollar has fallen sharply against the yen but risen dramatically against the Euro and most "emerging" currencies. In late November 2008 it touched 89 and had retraced nearly 38% of its decline from 2002. (click for updates) 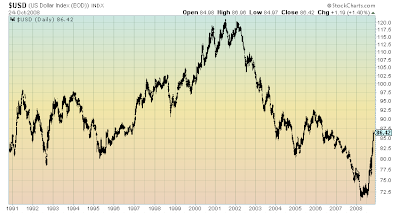 This development confounded many expectations. Most political economists had imagined that a crisis, if it came, would be bound hand and glove with a dollar crisis, but the demand for liquidity has perversely created a tremendous demand for dollars, as liabilities must be settled in the "reserve currency." The dollar itself was a "carry currency": investors or speculators in commodities, notes Ronald Solberg, funded their positions "with US dollar-denominated credit, in effect, creating a US dollar short position. Now that these commodity carry trades are being unwound, it exacerbates commodity weakness and contributes to US dollar strength."

In the panic, European banks required to settle their liabilities in dollars expressed fury with Washington and New York for having been sold a bill of goods.