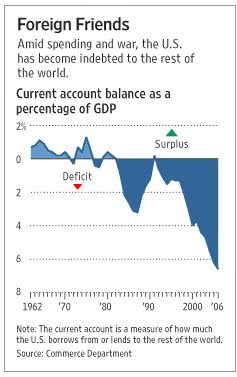 This (somewhat dated) chart from the Economist sets forth in a nutshell the evolution of the world economy over the last fifteen years. Economists called this “Bretton Woods II.”

If you look closely enough, you can see the following: China and other emerging markets grew into export powerhouses. American corporations moved manufacturing “offshore.” To finance the purchases of foreign goods, Americans went into debt. Who lent us the money? By and large, the people who were sending us the goods.

The explosive growth of exports from China and the emergence of the US credit bubble were opposite sides of the same coin. Americans borrowed money to buy homes and saw them appreciate tremendously in value. Wall Street bought the mortgages, sliced and diced them, and sold them to foreign investors with a grade AAA seal of approval, courtesy of oblivious ratings agencies and undercapitalized insurers. Exporters bought the paper. In recent years, the United States sucked in 85% of the world’s savings. It turned out that Chinese peasants were speculating (they bought the paper courtesy of their central bank) in the wild manias of Miami, Phoenix, and Inland Empire real estate. (Until it started fleeing from agency debt, as it did in November 2008, China accounted for "about 50% of all central bank holdings of Agencies.")

It wasn’t that complicated of an arrangement. The world sent us its goods; in return, we sent paper (really, electrons) bearing promises to pay in the future.

That arrangement is crashing.