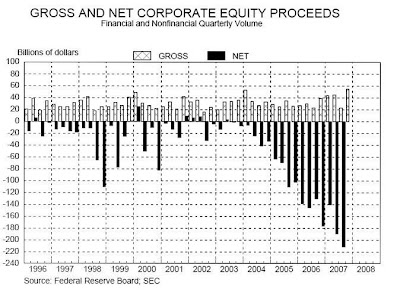 Over the 2004-07 period, US corporations went on a share-buying spree, funded largely through increased debt. The blogger Suddendebt notes that “the net amount of equity withdrawn from US markets through buy-backs, buy-outs and LBO's . . . reached a record $210 billion in the 3Q2007, from near zero in early 2004. The US has never before experienced such a sustained equity withdrawal in the history of its public markets. In just four years between 2004-07 total net equity withdrawn came to over $1.6 trillion, an enormous sum when compared to US market capitalization (end-2003: $14.3 trillion, end-2007: $19.9 trillion). The effect was to provide a constantly growing underlying "bid" for cash shares, one that leveraged the performance of indices: while total capitalization rose only 39% in the above period, the S&P 500 index gained 67%, i.e. 70% faster. Where did the money for the buy-backs and LBO's come from? Some came from corporate earnings, which reached a record ratio of GDP; but most of it came from debt. Record low credit spreads and volatilities encouraged CFOs and private equity funds to buy shares with borrowed money . . . .”

In the first two quarters of 2008, the trend sharply reversed. See update from New York Fed (page 11).
The practice of going into debt to buy back stock leaves no margin for adverse fortune and has put many companies at risk. See Border's sad tale, as related by Jeff Matthews. Its $250 million share repurchase plan in February 2005, when the stock was $25, received plaudits on Wall Street but, as Matthews notes, "it crippled a once wonderful chain of bookstores." Its "repurchase program was far too aggressive. Five years ago Borders had a $1.9 billion market value and more cash than debt on its books. Today, Borders has a $50 million market value (yes, that’s right, $50 million) and more debt than cash. Like, $525 million in debt against $38 million in cash. Oh, and the stock’s current price? $1.00 a share." At best, notes Matthews, this reckless exchange of equity for debt has mortgaged the future; at worst it has destroyed the company.